As the penultimate official VATPAC VFR Operations event, this flight will begin from my home airport of Parafield and at the discretion of ATC services attempt to fly from the Northern to Souther Adelaide beaches at low level. This requires clearance to fly and if the airspace is busy can be denied requiring pilots to seek the alternate Hope Valley VFR Route. Ultimately this flight follows the coast around Adelaide's Fleurieu Peninsula to the Mouth of the Murray Goolwa, my home away from home.

Aircraft : Single piston engine aircraft such as Cessna 172 or similar capable of 105 to 125 kias.

Altitude : Carefully negotiate Adelaide CTA until clear to the south then remain below the steps thereafter.

GPS Flightplan is available for FSX, P3D, FS2020 as a 'pln' file and X-Plane as an 'fms' file. The original Plan-G flightplan is also included for those that find this useful. These are all enclosed within a Zip archive.

Navigation : Pilots familiar with the area can navigate visually, for those less familiar the accompanying GPS Flightplan is the recommended method of navigating the flight.
NOTE : If scenery precludes the jetties along the coastal beaches then consider flying an aircraft that supports the GPS flightplans so the positions of the jetties will be obvious.

Australia uses CTAF (Common Traffic Advisory Frequency) for radio comms at uncontrolled airfields. Now that VATSIM has introduced AFV (Audio For VATSIM) CTAF can now be used across all VATSIM approved pilot clients. Pilots are requested to tune to the published frequency as detailed in the flight details for an event when operating in or around an aerodome to make and monitor CTAF broadcasts. Pilots should also be aware that it is a VATSIM COC (Code of Conduct) requirement that all pilots at uncontrolled airfields should monitor Unicom (Australia 122.80). It is highly recommended that pilots ensure that at least one of their "on board" COM radios (COM 2 being the most likely) is tuned to receive unicom transmissions in addition to transmitting and receiving on the published CTAF frequency. Please Note. All pilots should also be vigilant regarding the receipt of text on both unicom and CTAF. If it is discovered there is a pilot participating that is unable to receive voice transmissions, pilots should arrange to also broadcast via text to ensure those pilots without the benefit of voice is able to receive appropriate broadcasts. VATSIM provides an update guide for getting AFV working on each of the approved pilot clients.

Pilots also should read this post regarding the implications of using VATSIM UNICOM for CTAF. It provides some insight into potential pitfalls for the unwary when monitoring 122.80 in a CTAF environment.

For this flight we depart Parafield to the north via Saint Kilda before turning south and transiting Adelaide controlled airspace along the coast. This requires an ATC clearance (usually from Ground) arranged whilst stationary on the apron prior to departure in much the same manner as clearance to transit Adelaide airspace via the Hope Valley Reservoir is obtained. A coastal transit isn't typically granted to GA and is more usually provided to beach patrol aircraft. Since this transit crosses the departure/approach path to Adelaide's main 05/23 runway the coastal transit is divided into transition segments using beach jetties as boundaries and excellent visual reference points. ATC will not clear aircraft into a segment until it is vacant of aircraft. ATC will issue pilots holding orbits when unable to clear them to proceed.

Parafield aerodrome has a layout that can precipitate unintended runway incursions, most prevalently by unwary pilots transiting taxiway B. There are two undershoots to rwys 26L/26R that require clearance to cross, one of which is the threshold holding point for runway 21R. Most pilots familiar with Parafield typically request taxying via F to the run-up bay and then taxying to the 21R threshold via A and A4. Even this has some local considerations. Pilots routinely will hold position and give way to aircraft on approach or departing 21R/03L when transiting taxiway F. 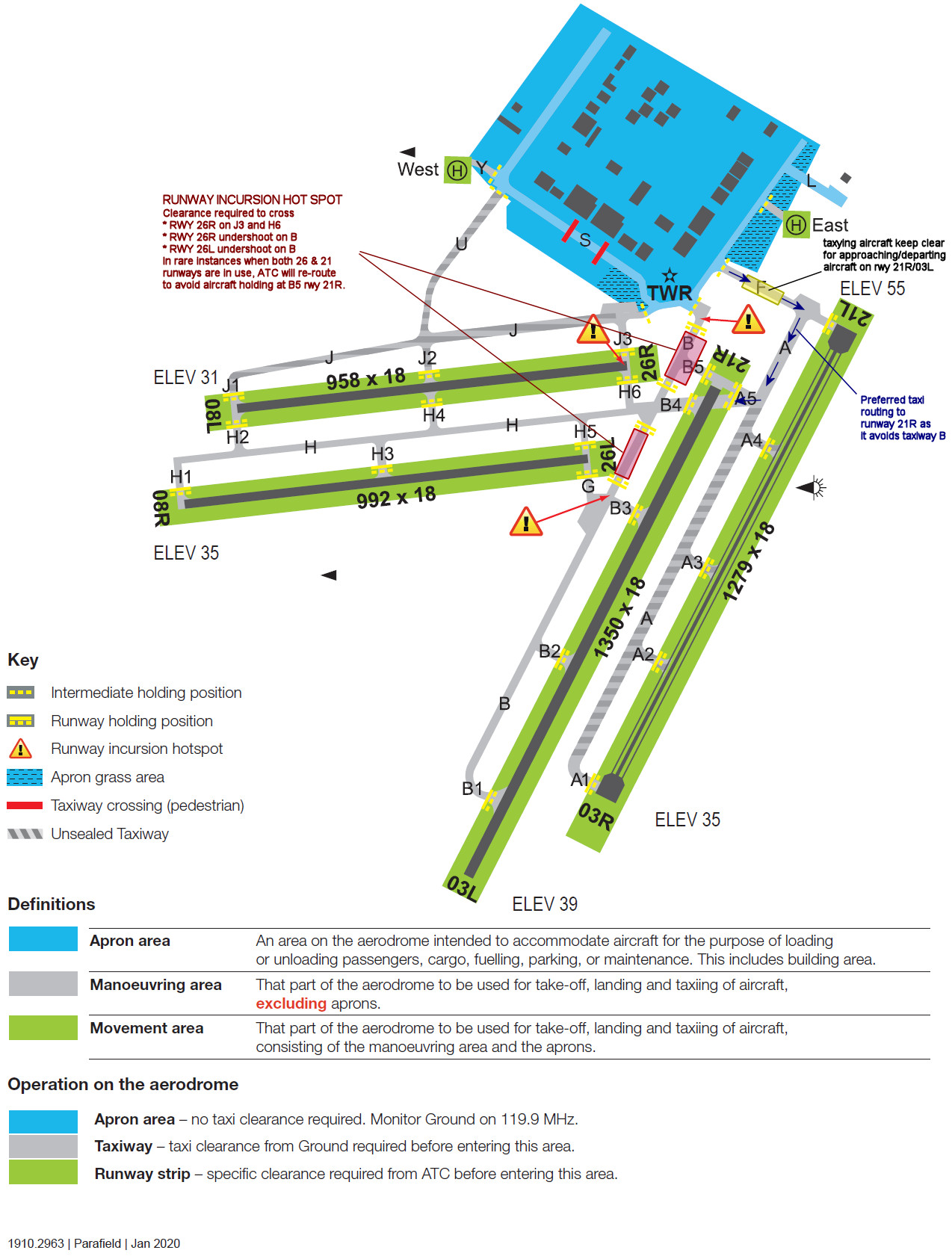 Note : Circuit runways 21L/03R and 26L/08R are only available when ATC is active 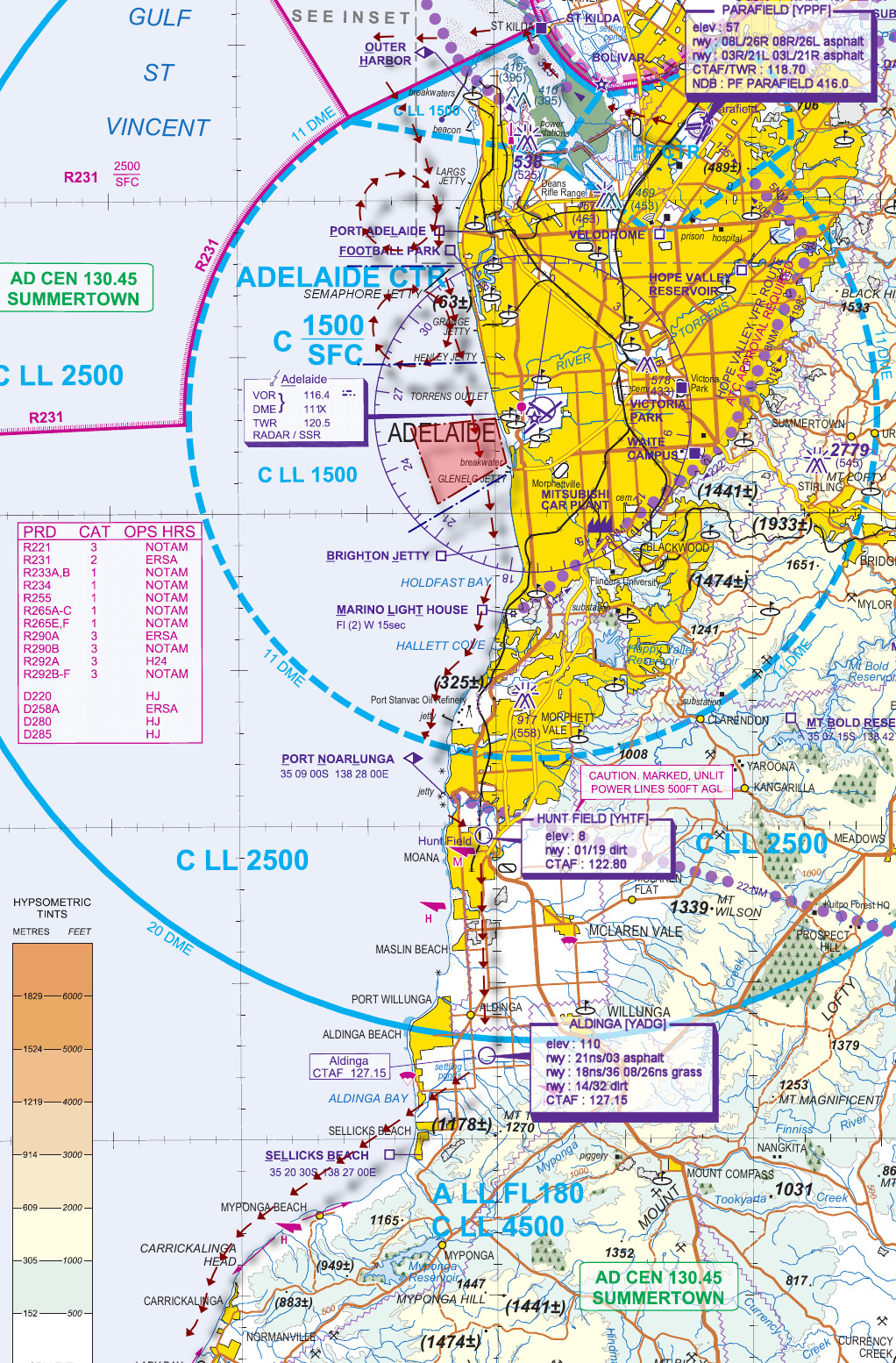